Ever wonder what people who don’t know anything about CI would say if they came and saw the film as their very first impression and then entered the JAM? 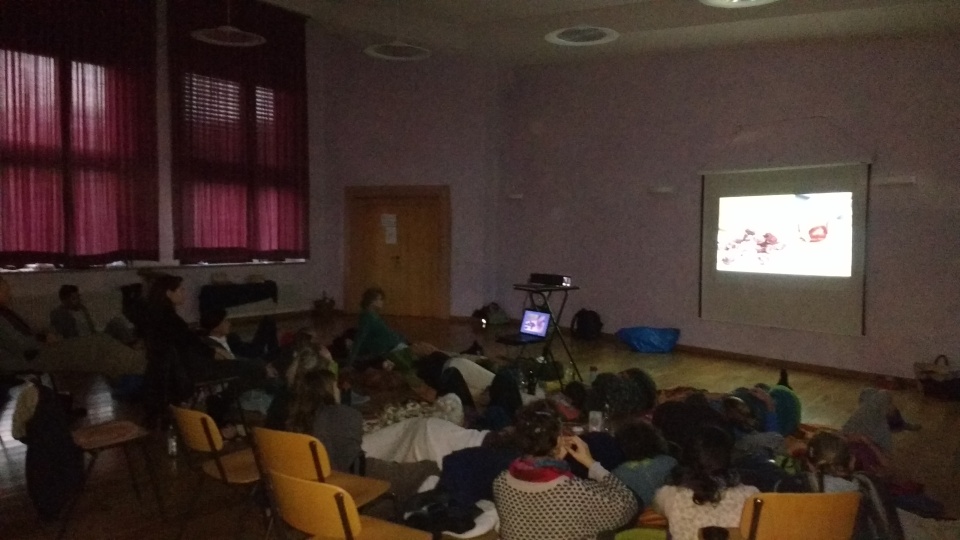 A: So you guys came and saw the film. Did you also see Fall After Newton- the early film shown?

A: I am just curious since it’s brand new to you, 1. How you found out about Contact Improvisation and thought about coming here today?

B: One of them who is in the workshop she sent an email to my mother actually. She’s dancing a lot around here so I heard it from that side and the third girl who is with us tonight –I met her last weekend in a movement medicine workshop. We started talking and she found out and said there is a Contact Improvisation workshop next weekend.   And I was like “yeah I was thinking about joining it but I couldn’t because of the time. And then said well there’s the jam evening with the film so she asked me if I want to join her and then I asked my friend to join me because we wanted to spend some time together on the weekend. That’s why we are here.

A: And did you have any idea what Contact Improvisation was before coming?

B: So I did because when my mom sent me the email I watched –I think you did a bit of the film in the internet, is it?

B: That’s what I saw. I saw the trailer. That was the only thing I saw.

A: Cool. And what was your first thought or impression from the trailer?

B: From the trailer was like it was something new for me. It’s not like my home thing in dancing. That was the first impression I had about the film but it made me curious.

A: What kind of dancing did you do before or do you normally do?

B: Movement Medicine. It comes from the Five Rhythms so it’s very free. My mother is doing Nia which is not that free but in comparison to Movement medicine, Nia, and Core Connection and Slow Motion my home base is the free stuff.

A: Do you connect to the word healing? That’s what comes to me when I hear the word ‘medicine’.

B: yeah. It is. That’s what I connect to and I find for myself that from all the things I’ve done over the many years- it’s when I am am totally free it’s important to come to myself in the beginning and I do it easier when I start with myself and when I’m really good in contact with myself I start to spread out and get in contact to the others. So that’s my way at the moment at the moment that I think works well for me and how I come into healing through the dance.

A [to C]: And what was your understanding of Contact Improvisation before you came this evening?

C: I didn’t have any idea what was going to happen tonight [both laugh]. She just said something about a workshop, Jam, and a film. Yeah, well, let’s go. So I didn’t know anything.

A: What was your first thought when you saw the film?

A: And do you do other kinds of movement?

C: Yeah, I’m a yoga teacher and I just started with a few acro-yoga workshops so that came to my mind as well because there are some similarities and that’s really new because before I really did just on my own. Doing something together is something new. I really like it. I enjoy it. Even tonight.   It’s special.

A: Which character did you both connect to in the film?

A: What was it about him that you connected to?

B: I think it was all about him like his wholeness. I think he was very very honest so he really showed a bit of his truth in these moments. Yeah-very authentic.

A: What does that say about you –in that you connected to Lior?

B: hmm. In the end when he was walking through the people I saw that he was little. He’s not that big, not that tall. It’s so funny because I never see it in other people and sometimes I don’t feel it in myself. I see myself on pictures and I say wow I’m really much smaller than most of the others. [laughter]. But I don’t feel myself like this all the time. That’s what I saw in the end with him. Wow, he’s not that tall. That was one thing in the end that I connected to.

I think in my life I’m very connected to my own truth more and more so what’s important for me at the moment and how can I live that in that life, that busy life with many other rhythms and so I at least would say that’s really an important thing in my life this year.

C: I felt the same when you asked us and I thought it’s because I met quite a few people from Israel l in the last two years and I don’t know what it is. Maybe it’s because they are really authentic so he is as well. They don’t fear to say no. It’s really something which is very important for me. I learn to say no more and more and it’s also his truth and his authenticity. For me it’s really important to get to know the truth, to tell the truth. So it’s quite similar to her.

But there was a bit of connection to the French guy as well.

C: yes. Because he was a bit shy and well, ‘I’m not good, I’m a beginner’. So I saw myself in him as well. But when I watched him during this film he was just amazing. So much sensitivity and so much beauty as well. His movements were just wow, amazing. In this last month I got to know that it’s kind of the same with me that I can’t see my beauty but I get to know it more and more. So that was a connection as well.

A: And then we went into your first jam experience after the film. What was that like?

B: Before I was like “Oh no, I can’t do it because my arm hurts, my back hurts and so I can’t go on the ground. I can’t roll. I can’t move so active with the others. So I started to move on my own. I really enjoyed it. A few months, a few years ago I wouldn’t have done it at all because I would have said “oh no, the others do it like this, they do it like that.” And today I was just like ‘ok, I do it my way and I enjoyed it. And then I was dancing with three different women and told the first two I can’t do that much and they respected it and it was really nice. And with the third one I didn’t have to say anything. It was small. It was just a movement with a hand and arm with the eyes and it was really deep and special and quite often I’m like ‘ok, it’s enough now and I’m off. And I really enjoyed just staying there and just being in the moment. So it was quite something. [sigh]

A: Do you think the film supported you to begin dancing tonight or was it just your state of being?

A: You don’t have to say yes for me, I’m just curious if it lead you to feel like you could do what you wanted.

C: I think the same. It was a bit like “OK you won’t be able to do a lot of it so it was two sides but more it was being more curious about it. I had a bit of a red line that you know something is not that new and you know where to start. I know that I like things about it. So for it was good as well, to have the film before.   Yeah, it was a bit like a book how to do it. I don’t know the English word for it.

C: Yeah [laughter] like a manual. Yeah, it was good for me to have it as a start.

A: What did you read in the manual? [laughter] How to do Contact Improvisation?

B: I read in it: to get in contact with different parts of your body, to support but even more to be supported. So that felt good for me tonight; to really let go and let someone else carry your weight. So it was really special for me tonight to really –not just the earth. I try that a lot. To give my weight to the earth but even to give it to someone else. To be in nice contact and enjoy it. To fly a bit. I like that as well. It was really quick. Really special. I started with the woman we came with and then one minute later I was in the air so that was very funny. I enjoyed it. I liked it very much. It was good. But then came as well my mind a bit more. I would really like to have some knowing about it to really go a bit more into it. I wasn’t sure. When I was sitting on the side now-as longer I sat there-you know you get out of the field a bit. I was thinking that I might miss the music a bit if I did it more often or frequently. But I think it’s not that much a part of it. Not always, nah?

A: The music is not always part of it. Yeah.

B: I know that music is often helpful from my side too. Yeah especially in the music you can always find your own story and for me it’s a support as well to have the music. Even if it’s music I don’t like. Even when they started to jam a bit on the side it gave me a bit of support. Hmmmm. Maybe it’ important to do it without music sometimes.

A:[to C] Do you want to add anything about your experience?

A: Thank you so much for sharing. It’s a gift for me to hear about what people’s first impressions are because I dance and work a lot with people who have done it for a long time. I also enjoy working with beginners but usually they have some so I was really curious about your first impression because you only get your first time once, right? [laughter]

B: Yeah-only one time the first one. Yeah-that really was our first time.

A: And that was quite a dive in.

A: I commend you for your bravery.

B: Thank you for giving us the opportunity. It’s not really common that you can just come as a beginner, watch a movie and then join in a group.

A: Should we go join back in the group? [The jam was still continuing in the next room.]

← Dance IS Peace
NYC: Inclusivity as a physical, musical and spoken Conversation →