The question of how contact improvisation is political was at the heart of the Dance is Peace festival in the beautiful Ukrainian city of Lviv in May 2015. We had seen Poured Out, the powerful video of spontaneous dances in Maidan square, Kiev,  at the Bern Jam the year before.

It was not difficult to resist the temptation to offer Five Ways In as a way of exploring what was meaningful for people at the festival. Their manifesto for the festival moved Sonja and myself deeply:

Dance IS Peace
There’s a well-known initiative called “Dance for peace”. Something was constantly wrong for us in this idea, and now we understood what exactly. Dance is something that has no higher goal than the dance itself. Putting a goal means you’re not really present in the dance. But when dance is real, you’re connected with everything. In context of crisis and war, you dance with it – and you became peaceful with war. Dance IS peace, and dance may include whatever. Accepting the reality, in dance, is more than war-and-peace duality. And this is true peace.

Another inspiring thought is from Mahatma Gandhi. “Be the change you want to see in the world. If you want to change the world, start with yourself”. So the peace starts inside, starts from accepting whatever happens, and working with it. That’s why we decide to dance.

Lior Ophir (one of the five protagonists in the film) was among the five other amazing teachers (Inna Falkova, Claus Springborg, Bruno Caverna, Stephen Bates and Angela Doni). As was Sveta Bird, who had appeared many times in Five Ways In. We had not shown the documentary in their presence before. From the website we got a feeling of the festival being an act of peace-it was translated in English, Russian and Ukrainian. Russian teachers and dancers were coming. 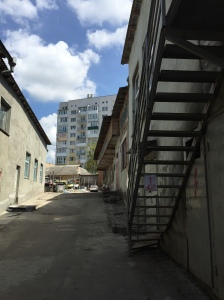 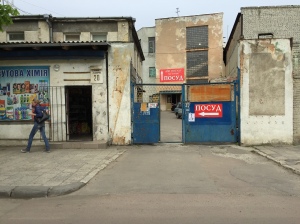 Inna Pavlichuk, the filmmaker of Poured Out and organiser of CJ around the world and Alex Postnikov, one of the dancers in Poured Out, were both planning to be there.  We had a feeling that a powerful journey awaited. We were not disappointed.

There were so many wonderful encounters, dances, sharings and insights during the days in Lviv that it would be impossible to share them all. So I have focused here on the screening and what it revealed and facilitated. 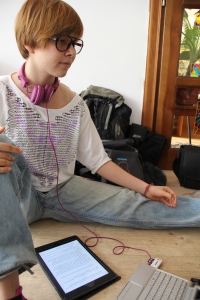 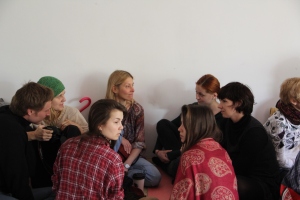 Yuriy Kuzin introduced the screening and set the scene for the discussion afterwards framing in terms of ‘whether we should or should not dance during the war?”. We also recorded him during the discussion.

Nadezhda Lebedeva did an amazing live voice over in Russian, the lingua franca for most people in the room.  She also translated the discussion (English subtitles meant that others could also understand.). It is partly out of gratitude to her and also my wish to capture some audience participation and particular Lior’s that I video recorded during the screening.

The screening also led to a wonderful conversation/interview with Nirvan where he shared his response to the festival,  the documentary and being in Lviv. He also shared what he felt were the parallels between CI and the spiritual practice he experienced in Mooji’s community in Portugal (5.15) referencing Jashana’s conclusion in the documentary,  how CI is a way of investigating our true nature, questions of privilege in CI (prompted by Jess Curtis’ statements) and how CI is interpreted and communicated in other cultural contexts. He sees the power of contact being manifest less in the big festivals than in the smaller local festivals.

We would like to offer the Russian voice-over over as a  Christmas gift for peace to all those acting for peace in Ukraine and particularly those using dance for that purpose.

Projects of Peace in Ukraine