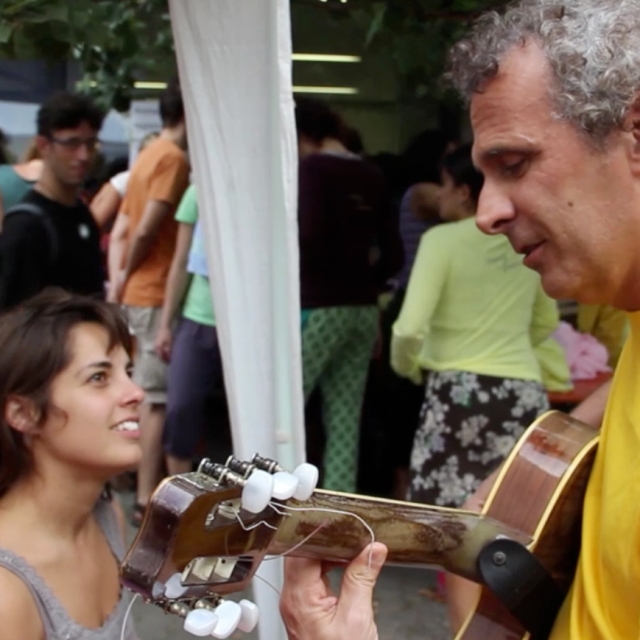 How is CI performed? What is it’s value within wider contemporary dance performances? What are the value of performance evenings in CI festivals?

In many CI festivals there are performance evenings. They are a contrast to the usual evening jam where the attention is rarely on only one or more performers.  In our film we showed scenes from several performances from the performance night that evening. Jess Curtis’ performance with Lea Kieffer was the first to appear after his interview about what he saw as the benefit of performance. We also see scenes from Camille’s performance towards the end of the film. Johan and Lior also participated in key performances during the performance evening, but they did not feature in the final film. They somehow did not contribute to the filmic narrative we were building about the experiences of the five during the festival. They did not feature strongly in what Lior and Johan shared in the final sharing circle that heavily informed our structure for the film. We are interested in the contribution of performance evening to the experience of a CI festivals more broadly, Freiburg Festival in the particular.

How do they actually contribute to how a festival is experienced and how the form is taught, shared and then used outside the festival context? Performance does not only take place during the evening event. Any dance event outside the sports hall, is also in a way a performance, that can be witnessed by those not in the festival. The class in nature for example was witnessed by many other people near the lake at the time. Few people however, were interested enough to enquire what was going on. Sometimes dancers will be explicitly inclusive with people in public spaces and invite them to participate. These are particularly interesting and serve as a unique space for CI to be shared across barriers typically not crossed in most dance performances.

To contribute to this theme please go to our feedback section.